Yesterday, Brett Bigham found the time to recap the impact of his amazing summer for us. From speaking out for social justice at the Lincoln Memorial to meeting Dr. Stephen Hawking, Bigham has had the opportunity to cross some great things off his bucket list. For him, the best still may be yet to come.

In the midst of his travels, Bigham presented anti-bullying strategies at the National Network of Teachers of the Year conference in Chicago. While there, he had the opportunity to share information about the guidebooks he is creating for individuals with autism and other special needs. He has created these books for landmarks in the United States and around the world. The books are free of charge and found online on his blog Mr. B.’s Classroom. Students anticipating a trip to an unfamiliar place can study the books so they will know what to expect.

“Places claim accessibility, but if there aren’t supports to get autistic people there, they can’t go,” Bigham explained.

He began creating the books for sites around Portland, Oregon, where his students may visit. For example, he worked with the Port of Portland to create a guide for the Portland International Airport. Research shows that individuals with autism have much more success tackling unfamiliar situations when they know what to expect. This is the goal of Bigham’s accessibility project.

“Kids who struggle with transition can’t go around cities and take part in field trips,” he said. “I would travel to a destination the week before a scheduled trip, take some pictures, and write the book. The kids could study the book and then could go on the trip.”

During his summer conference in Chicago, Bigham’s books caught the attention of some representatives from Microsoft. They were impressed with the scope of the work and that Bigham has created these guides for landmarks around the world, including the Parthenon in Greece and the Pantheon in Rome.

“When I started doing the international books, I knew the books in English wouldn’t help many. The real value is if someone in Greece can translate it into Greek. I did these books in foreign countries knowing they wouldn’t be helpful right away,” Bigham said. “I now have a German doctor who translates my books into German, and an Italian mother of an autistic child who translates them into Italian.”

Microsoft is interested in solving Bigham’s language barrier problem—they want to make his guidebooks into a global project. 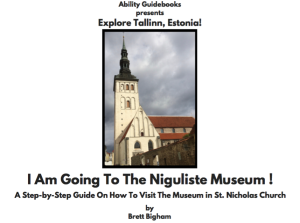 “They have interns who speak every language on the planet, so these books can be translated for people around the world,” he said.

Bigham knows that his books have been life-changing for some people. He actually began making them for one of his students with autism. The year before he taught her, this young lady was sent home 34 times for the self-injurious behaviors she’d exhibit when things grew unpredictable.

“As a human being, it was the hardest thing to see another human hurt herself like that,” he said. “I had to do something.”

During his first year with her, he introduced the books to help prepare her for changes during her day. She only went home three times for self-harm that year. The next two years he taught her, she stayed in class.

“She now has a job,” Bigham noted. “She can travel with her parents. She doesn’t need the books anymore. “

Currently, Bigham’s books are all available online for anyone to use. It’s his hope to make things better for all students.

“This is how I want to use my influence,” said Bigham. “I want to help open the door for people who can’t get through the door on their own.”

Thanks so much to Brett Bigham for finding time to visit with me to kick off Back to School Week! Stay tuned for some exciting interviews and a big upcoming announcement! Meaningful Connections is expanding—there’s no telling what you’ll find out in these upcoming days!

Also, you’ll notice forms of the word “find” in the first and last lines of this blog post. That’s so I can link up with Mama Kat’s Writing Workshop today.

Memorial Day–Encourage Our Veterans to Tell Their Stories

Five Reasons that Teachers Are Superheroes